YOU can be a good witness

From the Chick tract, "This Was Your Life."

Christians write, "These are the only tracts I get asked for!" 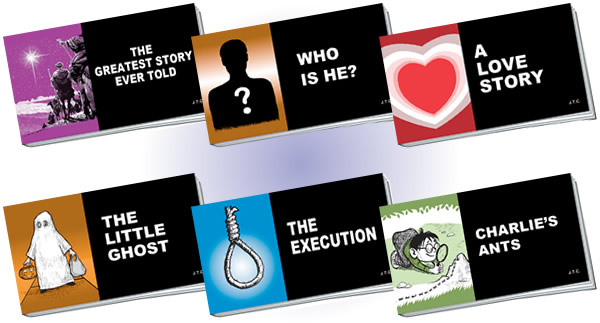 These little cartoon tracts can help you become the witness you’ve always wanted to be. We’ve all read Jesus’ command, "Go ye into all the world, and preach the gospel to every creature." The problem is how to do it.

We all have jobs, or school, or families, or something that eats up our time. A river of people go by us every day, but how on earth can we obey Jesus and reach out to them? Chick tracts can help!

Ordinary Christians who are using Chick tracts can’t get over how people love to get them, read them, and keep them. Look at what they are saying:

"… they pass around like hot cakes. I have to admit I’m thrilled with the actual mileage these little soul winners travel."
"… people keep the books to re-read them and show them to others."
"The kids as well as adults really read them."
"… most people will read these, even if they have refused to look at all other gospel tracts."
"… they were an aid to me coming to Christ."

"But I’ve been told that tracts are a waste of time."

Of course, the best thing to do is to sit down and discuss Jesus, one on one, with every person who has a shred of spiritual interest. There is just one problem . . . we don’t know who they are! In order to find them, we’ve got to advertise.

The toughest problem with witnessing

Years ago, Jack Chick was a new Christian who faced a problem. Whenever he would try to witness to someone (to obey the Lord’s command) something would interrupt him. If he was in an office, the phone would ring. If he was in a home, the dog would bark, the kids would cry . . . it was always something! There had to be a way to reach people!

He found a way to make people listen!

Chick was a cartoonist. His entertaining cartoons were being printed in newspapers. He realized he knew a way to hold someone’s attention in a way that was "interruption-proof." He began drawing gospel cartoon tracts. They had stories that would grab the reader. The cartoons would make them chuckle. They were hooked! And then he would present the gospel. It really worked!

"I gave a man a Chick tract at a train station. Several hours later he rang our doorbell. After talking awhile, he got saved."
Hi There! Was read by my son as a joke – scared him silly – he belongs to Jesus now."
"A friend got saved due to This Was Your Life. He had been a Satanist."
"I found a Chick tract in the restroom in high school. I was saved from reading it."

Chick found that he could give these to anyone and, if something interrupted their conversation, that tract would go into their pocket to be read later. Since the tract was full of cartoons, they didn’t seem to want to throw it away!

Even shy people can witness this way.

If you find it difficult to witness because you are shy, don’t feel like the you’re the only one. Millions of Christians struggle with the same thing. Here is how one Christian expressed it so well:

"I've been in the tract ministry for years and sure love to pass out your tracts. They have grabbing stories which cannot help but to be read. I put them everywhere because I'm too shy to talk to people. I am not very good with my words but I love everyone and don't want anyone to go to hell for eternity. I couldn't wish that on my worst enemy."

Maybe this will happen to you.

"A lady came out of the ladies room in a fancy restaurant holding one of your tracts that I had just put in there, tears streaming down her face. Her makeup was a mess. I believe she was under conviction from the message in that tract."

You just have to get started.

Since people love to receive Chick tracts (they will often thank you) it just makes it so easy! If you’re not sure how to start, order some copies of our most popular title, This Was Your Life, and start leaving them around town.

If you need some ideas about where to leave them, read our free cartoon training booklet - Who Me?". It’s got some great ideas you can actually use!

Or, just click here to order a sample pack with over 130 different Chick tract titles for only $23.95 plus shipping. Your whole family will enjoy reading through them, and you will have just the right tract for anyone you meet.

It’s really fun, and you will have the satisfaction of knowing you are pleasing the Lord. Try it today!

©1984-2023 Chick Publications, Inc. All rights reserved. Some portions of this site are copyrighted by others and reproduced by permission, as indicated by copyright notices on individual pages. Privacy | International Resellers