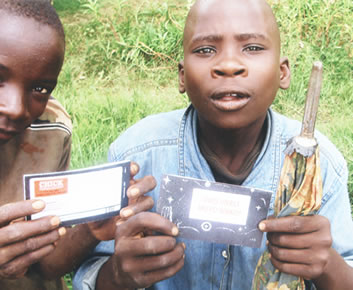 Chick tracts and videos continue to do their job in remote corners of the world. Below are pictures sent by Lucas House on a short term missions trip to Africa.

He took 1000 copies of This Was Your Life in the Chichewa language. "I gave all 1000 away to the kids and adults and everyone went nuts to get them," he reports. Next time he plans to take more tracts.

Missionary Mike Greene reports that he has completed translation of three more Chick tracts into Lingala, a language spoken in the Congo. Over 70,000 tracts in that language will arrive later this year in that country.

Mike says "The tract, Tiny Shoes has been the most popular tract we`ve translated. Recently I gave one to a man who works at one of the grocery stores in town. The next time I saw him, he approached me, and with watery eyes told me the impact it had on him. He wanted to know 'how I knew` he had a drinking problem. I told him that I didn`t, but that God did, and wanted to deliver him from it. I told him how I was saved and delivered from alcohol 23 years ago and that I haven`t had a drink since." The tract opened up a witnessing opportunity.

Another missionary working in Nigeria and Ghana is showing the Light of the World video in the public schools, a university, and prisons. "Almost 12,000 people viewed the DVD, and as a result of that, we had 7100 professions of faith," he writes. 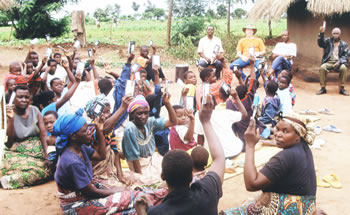 Couriers for Christ continue to translate new Chick tracts and include them in container shipments to Lithuania and the Czech Republic. Over 100,000 tracts have been used in establishing new churches in these countries.

Missionaries all over the world know the value of seeding their fields with good gospel literature. If the missionaries supported by your church are not using Chick tracts, invite them to visit the www.chick.com web site and see if we have tracts in their language. Chick Publications has over 1,000 foreign language titles in over 100 languages. Chances are very good that they will find tracts in the language they need. Tracts can be purchased and drop-shipped directly to the missionary.

If you do not know of a missionary who could use the tracts, Chick Publications maintains a Missions Fund that makes tracts available for missionaries. 100 percent of the money contributed to the Missions Fund goes to the purchase and shipping of tracts to missionaries. Chick Publications cannot issue a tax-deductable receipt, but if the money is put through your local church, they often can issue a receipt for the donation.

NOTE: In the last BATTLE CRY, we said that 240,000 tracts were on their way to Zambia. Instead, they were destined for Zimbabwe. We just heard that they arrived safely and are in storage waiting for a mass distribution in the next few weeks.

Other Articles from September/October 2009: