Who is the "Whore" of the Book of Revelation?

From "Smokescreens" ©1983 by Jack T. Chick. Reproduced by permission.

Chapter Four: The Whore of Revelation

Do you believe this monster is simply a backslidden or apostate church like many of our Christian leaders tell us, or is she the whore of Revelation? Let's look at scripture and check it out for ourselves. We find in chapter 17 of the Book of Revelation the Bible says, "I will show unto thee the judgment of the great whore that sitteth upon many waters:" And, of course, in scripture the reference to many waters means multitudes of people. Today the Vatican boasts almost one billion followers. What's that, almost a quarter of the earth's population?

And it says, "With whom the kings of the earth have committed fornication." If you look back in history you will see that almost every king has had political, economic or religious ties with the Vatican, starting with Constantine the Great, who was actually the first pope, and presided over the first council. Constantine was never saved. (That was another smokescreen.) Most nations today have diplomatic representatives in the Vatican.

"And the inhabitants of the earth have been made drunk with the wine of her fornication." We have just looked at the madness of World War II and how it was set up by the Jesuits. And the Bible goes on to say, "The woman was arrayed in purple and scarlet." These are the official colors of the Vatican. "And decked with gold and precious stones and pearls." Did you know the Vatican is the wealthiest organization on the face of the earth? Later in the book I'll go into this in more detail. The Bible goes on to say, "And on her forehead was a name written, MYSTERY, BABYLON THE GREAT." Where did Catholicism come from? If you do a little research you'll find it came from the ancient Babylonian mysteries, and you can trace it right back to Nimrod and Semiramis. Only the names were changed to make it look like a Christian organization.

"The Mother of Harlots and Abominations of the earth." Can I name a few abominations that came from Rome? We have the Nazi Party, which was staffed with Jesuits and high ranking Catholics. And then we have the communist party, another offshoot, or branch of the mother of harlots.

Listen to these names: Marx, Engels, Stalin, Lenin, Fidel Castro. All were trained and guided by Jesuits. We are publishing two new books that go into detail on this. So these are her babies. Just a few of them, not to mention some of the spirit cults like voodoo. In the voodoo creed they state that, along with their religion of demon possession, they believe in "the holy Roman Catholic church."

The Bible goes on to say, "And I saw the woman drunken with the blood of the saints." The Roman Catholic Institution tortured, maimed and murdered 68 million people during the Spanish Inquisition alone, and many of these were Bible-believing Christians. 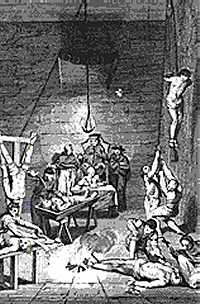 At the end of the Dark Ages, when the popes ruthlessly controlled Europe, God raised up Christian men and women who knew the Bible and loudly proclaimed that the deadly Roman Catholic Institution was the whore of Revelation.